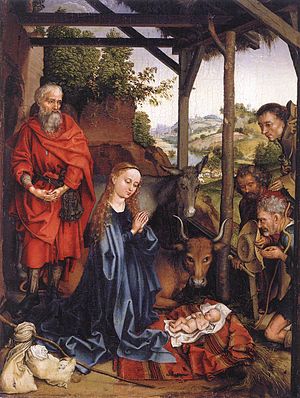 On January 1, 1929 a German minister named Pastor Ulbricht wrote the following to the High Church Council in Berlin.  He was updating the Council on the progress of a young assistant pastor in his parish.

He particularly devoted himself energetically and with kindness to the young people, who were enthusiastically devoted to him…In a truly exemplary fashion, he produced a nativity play in the church with the children on the Sunday before Christmas, a project with endless rehearsals and practice that demanded a great deal of hard work. It was enormously well attended by the German colony, and the play was performed to great satisfaction.

The young assistant pastor was Dietrich Bonhoeffer.  He was 22 years old.

A colleague told me that once when she was at Andover Newton Theological School, a professor told her that it was a “waste of a seminary student to make them do the children’s pageant.”  She was a ministry intern at a local church and was deeply involved in the “endless rehearsals and practice” of a children’s Christmas pageant.

This Sunday is the Children’s Pageant here at church.  We often overlook the significance of the pageant dismissing it as cute or precocious (which it is) and failing to see its theological significance.  Like Bonhoeffer, the young women at our church have worked tirelessly on the Christmas Pageant.  And like Bonhoeffer, they know that the pageant is more than shepherds in bathrobes.  The pageant is the one single moment of the Church year that we relive the most transforming event in human history.  The moment when the earth was tilted on its very axis.  The moment of Jesus birth.  Not a waste of time, but the very reason for time itself.

One last thought. Why were the young people so “enthusiastically devoted” to Bonhoeffer?  Perhaps bringing to life the Nativity with children was an honor to him and his joy and enthusiasm caught the devotion of the children.  Maybe the presence of the children renewed him.  Maybe the children reminded Bonhoeffer  why he was a pastor in the first place.  And maybe it was that early experience with the pageant that inspired him to write, from a jail cell many years later:

“No powerful person dares to approach the manger, and this even includes King Herod. For this is where thrones shake, the mighty fall, the prominent perish, because God is with the lowly.”

Come to the pageant this Sunday.  God is in the manger.

(I found the excerpt about Bonhoeffer and the Christmas pageant at http://experimentaltheology.blogspot.com/2010/12/nativity-play-1929.html and was inspired by Bonhoeffer’s book, God is in the Manger)